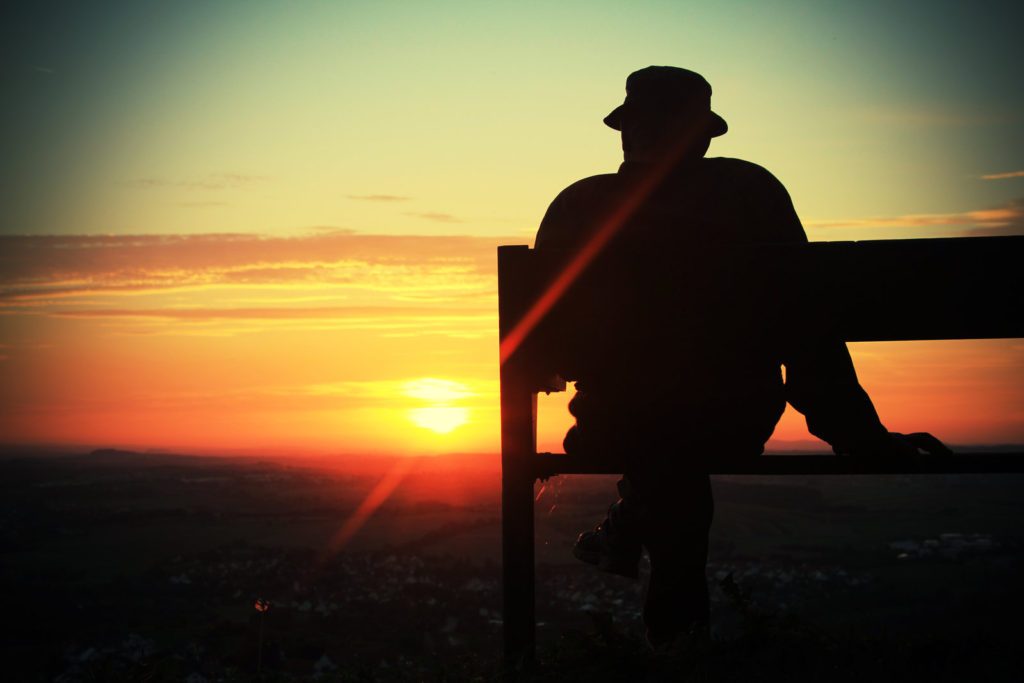 He is an 83 year old retired Major… The ‘Forest man’ as he calls himself.  He believes that the term ‘Forest Man’ helps people remember his surname, for both have a close resemblance.

I first met him three years ago, though he doesn’t even remember a bit of it. I was heading to my office on a bright sunny morning when he stopped me and requested to be dropped at a bank on my way. I had always seen him walking in the garden, alone. His gliding steps made me appreciate his physical fitness, for given his aged look it was something remarkable.

The most retentive memory of my 10 minutes conversation with him is that he dreaded death. He articulated his fear by mentioning “I get scared when I see young people like you, for it brings me closer to the fact that I have aged enough to bid a bye anytime now”. His words were heavy to start my day with and the entire day, I kept myself glued to this thought.

Years passed by… I went to the UK, returned after a year, conceived and delivered a daughter. It’s after a couple of years that my life has resumed to the old routine of walking in the evening, this time with a pram though. Last month, I saw the same old man, but not alone. Along with him strolled his walking stick and a young man who seemed to be appointed only to take care of the uncle. I could see crow’s feet under his eyes and his time chiseled face talked a lot about his old age.  He seemed to have become reclusive and looked a bit spiritless, as if life and old age were getting better of him.

“His health has deteriorated”, I said to myself.

Elated to see him after many years, I greeted him with a smile and he reciprocated warmly. His smile dropped away the years from his face and his weak teeth gleamed like piano keys. Although his voice trembled when he said hello, I knew that he hadn’t completely given up on life. He introduced himself for the first time as Mr. —. Seeing him walk in the evening has become a daily routine. The only difference is that he always sees me with a buggy, while I see him with a walking stick in one hand and Bhola’s hand in the other.

One evening while I was sauntering with my family, I approached uncle and asked if he would like to come for a movie with us. My intention was harmless; I wanted to bring a change in his mundane routine. I left the choice of movie, day and place to him. By then, I presumed that he stayed alone, that his wife was no more, whereas his children were settled abroad. I don’t know if my proposal hit him like a shock or surprise, he politely told that he would revert later. The next evening he declined to come for a movie giving to his back ache and ill health but invited us all to his place over the weekend.  The plan couldn’t materialize but this is how our friendship with this 83 year old Major began.

One day, uncle asked Bhola to hand over a packet full of fruits to me. He had brought some Papaya, Sapodilla and Bananas. He asked about my well-being and left in merely a few minutes as he could not stand for long. A couple of days later, I bought some goodies for uncle and eventually my evenings became a little more meaningful and fun. One day, uncle mentioned how lonesome he feels and how he miss talking to people. He is a man of few words but conveyed clearly what old age had done to him. With him, stays his daughter, who has returned from London only a few years ago. But bizarrely, uncle is always spotted alone.

That day, Bhola came to call me while I was strolling in the cold breeze. Uncle had brought some treats for my daughter and a couple of alcohol bottles (wrapped in two layers of newspaper for no one to even get a whiff of the packed content) for my husband. He gave one packet to my daughter, the other one to me and said, “This is for Mr.Gaurav. I buy this for my close friends and family members”. His feelings touched my heart. I insisted that he visited our home for tea that evening. He agreed and we started walking towards my apartment. I could sense his conscious steps as he kept apologizing for the tortoise gait that he paced with. On his way he only talked about his days as an Army officer and about his time forgotten achievements. He cited how well he rode a horse and about his fondness for mountaineering. He also talked about the days when the National Defense Academy (NDA) used to be in Dehradun and how much everything has changed with time.

I could see Maj. — enjoying the conversation. This must have been an off-the-wall routine for him. He could not stop talking about his past and also shared with me the regrets and mistakes he made in life. My presence only acted as a receiving end and all I could do was empathize and sympathize. He didn’t stay for dinner but left me stay with my thoughts. He asked Bhola to help him walk towards the door. His stained clothes, which became more like a uniform, for he wore them daily, made me notice the bad shape that uncle was in. I thought he needed more of love, attention and affection. All I could do was wish for his good health. He thanked me for the time I spent with him, waved a bye in the most courteous manner and smiled in a way that could only soothe down my senses.

Soon after he left, the thoughts in my mind moved from one to another, from smaller to bigger like a river that flows slowly into a sea, becoming deeper and stronger … who are we? What’s our end? What’s life all about?  A soldier, who was also a good horse rider and a mountaineer, sees such an ill period of human life. He is all alone, wears unkempt clothes, the hands that once held the guns to combat battles now holds a walking stick, the back that once carried kilos of weight now refuses to carry its own body weight, the legs that once ran and walked miles can’t move a few steps without an effort, the voice that once commanded orders now wobbles every time he speaks, the physique that once made him proud has left him to spend the old-age alone, and the toned face has now been replaced by wrinkles all around. The man had his repentance and gaffes to talk about. He also relished his fitness and basked in his glory.

This is the ugly truth. It’s not only about this ex-soldier but all of us, I mean. One day we will face the sixties, seventies and eighties. Who knows how we will be? Who knows whether we will be alone or with our companion? Who knows if we will have regrets or satisfaction? Who knows if we will be able to do the undone and undo what’s done? Who knows…. ????? Every year will make us look back into the past with glee and look forward to the next with nervousness, for no one knows how tomorrow will be. Honestly, thinking about the old age gives me the heebie-jeebies.

Uncle’s condition reminded me of Alexander the Great’s final wishes, which said, “My first wish is to have my physician bring my coffin home alone. This is to let people realize that a physician cannot really cure people’s illness. Especially when they face death, the physicians are powerless. My second wish is to scatter the gold, silver, and gems from my treasure-house along the path to the tomb when you ship my coffin to the grave. This is to let people learn to treasure their lives. I spent my whole life pursuing wealth, but I was wasting my time most of the time. My final wish it to put my hands outside the coffin to let people understand that I came to this world with empty hands and I will leave this world also in empty hands.”

The ‘Forest Man’s’ eyes were full of helplessness. Given a chance, he would want to press the rewind button of his life for betterment.  We read so much about life, about what it is, about how suddenly it will end one day, without giving us any moment to finish our to-do list or to express the unsaid. We keep living for things that matter the least and ignore what matters the most. To earn a living and living only to earn are two different goals. Sadly, we mix them.  We love and lose, hurt and get hurt, forgive and forget, fight for possessions but the ultimate truth is that in the end everyone loses everyone and everything. I think if there’s even a slight chance of getting something that will make you happy, it’s worth risking. Life is shorter than we believe and happiness is rarer than we think. Dance in the rain, write love-letters, seek forgiveness and learn to forgive, enjoy with family, express love, eat what you like and wear what you think that ‘special’ person likes, kiss often, hug without a reason, spend lazy days, help others, travel whenever you can and most importantly have no regrets. No one can plan a perfect old age but we can certainly try to build perfect memories to die with.

.. And today it’s been almost 10 days since I saw uncle. I spoke to him over the phone to know about his well-being. Apparently, his health is fading away… All I wish is for him to fight this phase as aggressively as he would have fought an enemy. This retired Major has unknowingly changed something in me, something about me.

I salute to you Major, the ‘Forest Man’!